It is said that Bucharest city was founded by a shepherd named "Bucur" (meaning "joy" in Romanian). Bucur’s flute made him loved by the locals who gave his name to the place.

First mentioned in 1459, Bucharest city became the capital of Romania in 1862.

Once considered “Paris of the East”, Bucharest is presently the most economically-developed city in Romania. After the events of December 1989 (the collapse of the brutal communist dictatorship), Bucharest changed its face.

Bucharest is also the centre of Romanian mass media. National television networks, national newspapers and radio stations have their headquarters in Bucharest. Many Bucharest newspapers and media publications are based in The House of Free Press (Casa Presei Libere).

As for politics, ideological debate is lively in Bucharest. Romania’s major problems are discussed and debated in the capital, where most political parties are based.

From the rocking behemoth that is B'ESTFEST to the roaring Formula Threes that take to the streets during the Bucharest City Challenge to the Bucharest International Film Festival which ushers in the city's Cultural Spring celebrations, welcome to 2camels' special take on 10 wonderful fiestas, fairs, celebrations, holidays, carnivals and festivals of Bucharest. 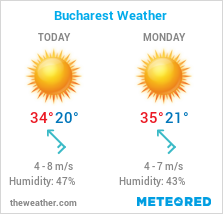